So I had an external harddrive collecting dust on my shelf. I used to use it before I got a new external which covered everything I needed and more.  I wanted to find a use for this drive and with my recent purchase of a server I figured I could use another harddrive. So without any idea of how to take apart the drive, I dove in and looked to see what would happen.  The following is a guide on how to take apart this harddrive, but most external harddrives are similar and you might be able to apply some of my techniques to taking apart yours.

WARNING: This may permanently damage your harddrive and only you can be responsible for your actions

So the drive that I have is a Maxtor One Touch 320 GB hard drive. 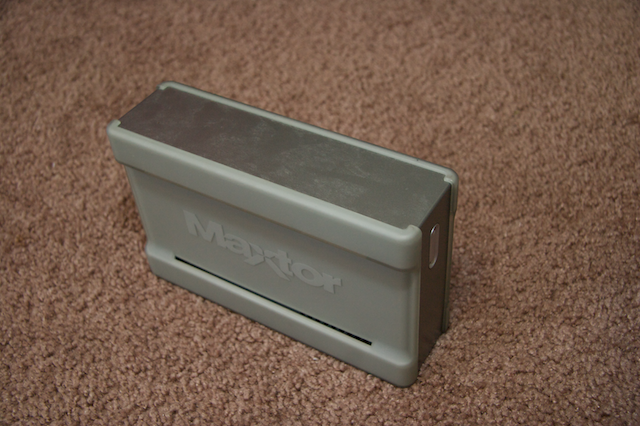 The first step I took was to format the drive into one 320GB partition, using MS DOS FAT-32 as a filesystem.  I did this because if I were to plug the drive into anything else, FAT-32 is a pretty universal file system and I can’t imagine any software that would have qualms with it.  Previously the drive was Ext4, so this required changing if I wanted to use the drive as a second drive in a Windows system.. 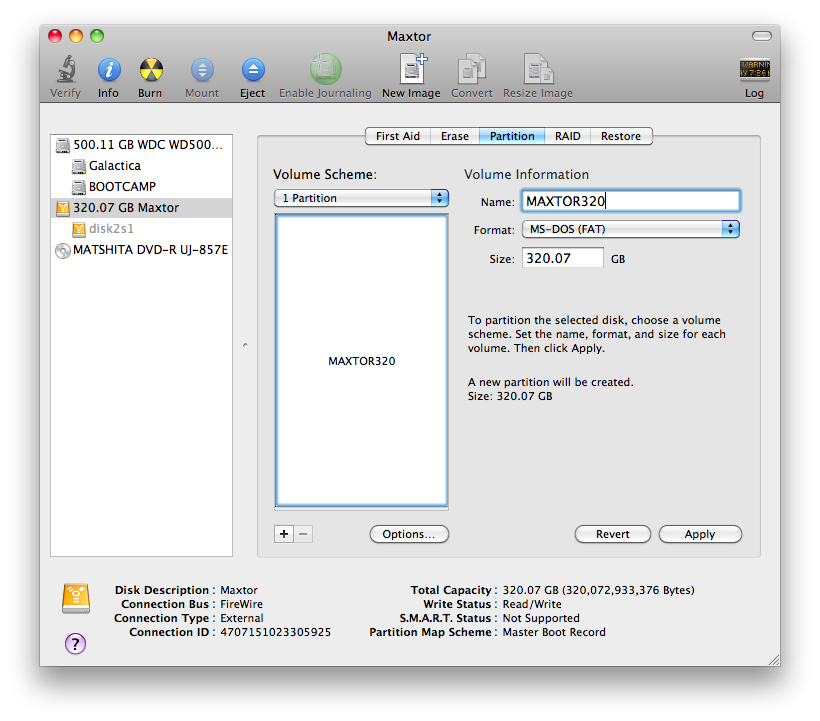 With the drive formatted, I ejected it from Finder and then unplugged the drive from both the computer and the power source.  This step is VERY important, never take anything electronic apart while it is still connected to a power source. I then removed the two screws near the plug panel. Note the evil warranty sticker covering one of the screws. 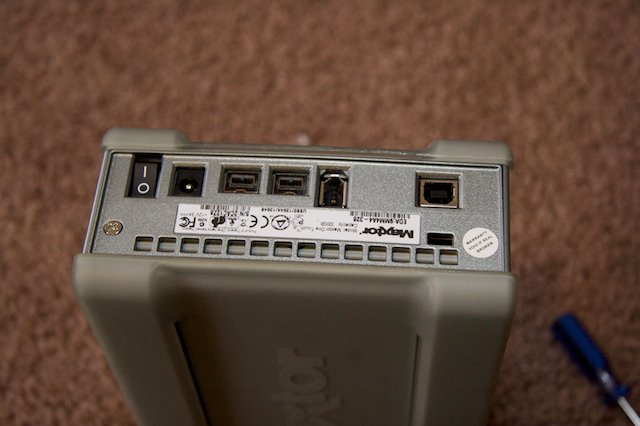 Once you remove the screws, it’s simply a manner of prying off the faceplates.  The two sides are kind of rubbery and are attached with little pegs.  When I pried these faces off the pegs broke, so you’ll probably hear some snapping.  I didn’t care about the pegs breaking but I didn’t necessarily want to break the face places so I gently worked them out until they broke.  In addition to the side plates there was a plate that wrapped around from the top to the front to the bottom. 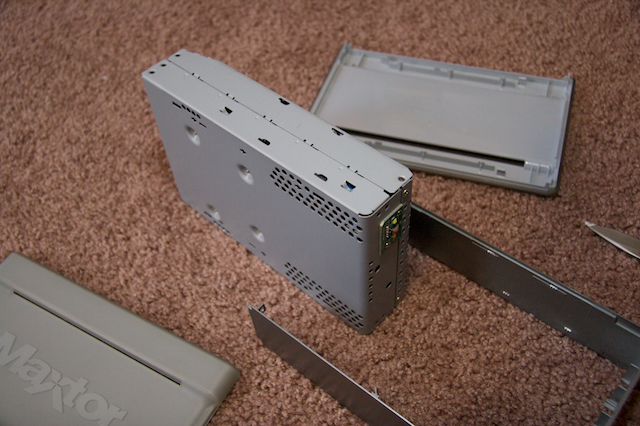 With the covers removed, I unscrewed the two screws that were on the same panel as the fan, but on the opposite end.  These screws were very short and unscrewed simply.  Then, if you take a look at the tabs on the side of the drive you’ll notice that you can simply slide that cover a little and pull it off. Do not remove it full yet however, there are two screws holding in the fan that must be removed. 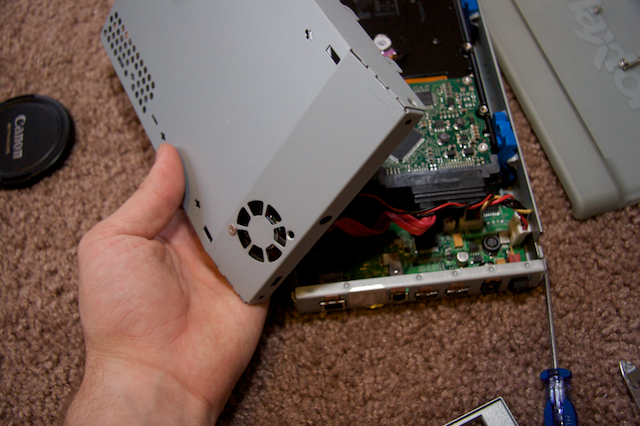 Next, I unplugged all the cables inside the enclosure.  The red ribbon with the black connector is the SATA cable, and the twisted red/black/yellow cable is the power connector.  These must be removed in order to remove the drive. 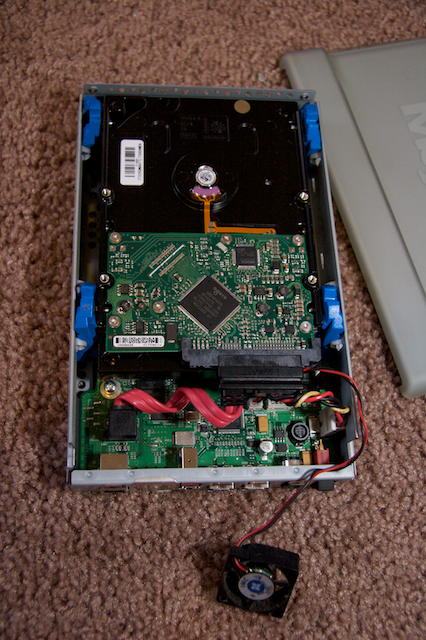 Once these cables are unplugged, all you have to do is lift out the harddrive.  My harddrive had rubber brackets mounted to reduce vibrations, so I removed these.

After the drive was removed I was able to read the label.  Turns out the disk was a Seagate 320GB 7200.10 harddrive.  No surprise there as Maxtor is now owned by Seagate or something like that.  Not too shabby.  I also hadn’t thought about an additional benefit.  With the harddrive removed, the enclosure can now act as a SATA-USB/FIREWIRE adapter. 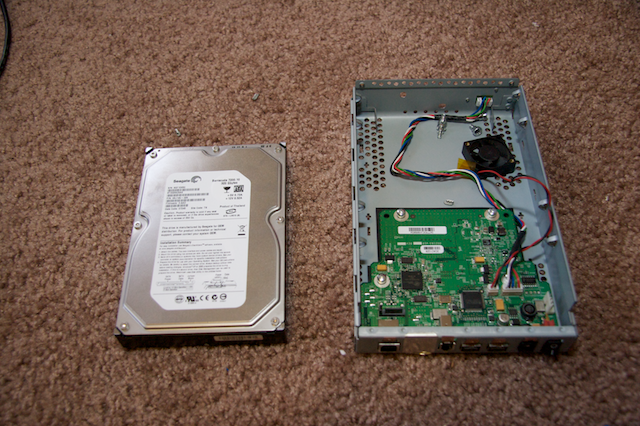 Now I just need to grab a 5.25 HDD tray and I can install this in the server case when it comes… Unfortunately the case for the server is on track to be delivered in early April.  And so I wait.

If you have any questions, feel free to ask.  I’m still getting used to this whole instructional blog post sort of thing.